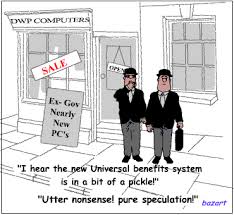 Committee Chair Frank Field MP calls evidence submitted to the Committee by Halton Housing Trust the “most damning” he has ever read on what he describes as Department for Work and Pensions “maladministration.”

The Halton Trust has accumulated over £400,000 of arrears as a direct result of the rollout of Full Service Universal Credit. This means that just 18% of its tenants owe 55% of all its arrears. Over the last 12 months the number of referrals the Trust has made to local food banks has more than doubled.

The Trust reports on the frequent wrong categorisation of benefit claimants’ eligibility for Advance Payments while Universal Credit is being processed.

In a sample of 1,252 tenants the Trust found that the majority of claimants were eligible for a Benefit Transfer Advance as they were moving from a so-called legacy benefit (like Jobseeker’s Allowance) onto Universal Credit. This is paid back during the first 12 months of a Universal Credit claim.

Those claimants who were offered Advance Payments were offered a New Claims Advance that had to be paid back within 6 months: the submission details the even bigger financial problems this caused for families. In addition, the evidence reports:

Despite the Department for Work and Pensions advertising the availability of personal budgeting advice:

Further examples cited by the Trust include:

“It would be difficult to think, in all my period of Chair of the Select Committee, of a piece of evidence that is so damning on the DWP maladministration which is mangling poorer people’s lives. This maladministration is throwing Universal Credit claimants’ finances into chaos.”

Cuts under Universal Credit are discriminatory and may be illegal