Yesterday, heartless Amber Rudd was accused of shrugging off ‘heartbreaking’ Universal Credit experiences and stories by suggesting they are about only “one or two” people.

This is a government who tell us with a straight face that inflicting absolute poverty on the poorest citizens is somehow going to make them less poor. This ideological framework is also imposed upon people in low paid work, struggling to meet their basic living costs. So the government slogan “making work pay” is meaningless Orwellian tosh, as is the Conservative’s longstanding ‘culture of dependency’ thesis and ideological justification narrative for inflicting devastating cuts on those who can least manage to get by.

The Work and Pensions Secretary made the outrageous comments after being confronted by the Mirror about flaws in Universal Credit.

For years many of us have published articles ranging from flaws in the social security system, affecting millions, to struggling readers who’ve been forced to food banks, as well as administrative ineptitude and bullying that has often had catastrophic consequences. The roll out of Universal Credit has caused hunger, destitution, deaths and suicides, let’s be frank and pay some attention to the empirical evidence, rather than expedient ideological soundbites.

Amber Rudd told the Mirror: “Some of the criticisms that have come from various publications have been based on one or two particular individuals where the advice hasn’t worked for them.”

That statement flies in the face of empirical evidence. On this site alone there are MANY individual accounts of the harms arising as a result of Universal Credit. And to claim the reason for these harms is because “the advice hasn’t worked or them” is a serious and disgusting trivialisation of the psychological distress and trauma, the deaths, suicides, rising numbers of those facing hunger, hardship, and destitution that Universal Credit, combined with such systematic government denial and indifference, is causing.

She added: “But in the vast majority of cases, and I would urge everybody who hasn’t to take the opportunity to speak to work coaches, the sort of support that individuals get is a completely different approach to what they had previously.”

Yes. It’s not actually support. It’s a programme of discipline, coercion and punishment.

However it isn’t work coaches who have to live with the consequences of a system that was designed to be an increasingly standardised Conservative hostile environment. The government seem to believe that publicly funded public services should serve as a deterrent to people needing support from the public services they have paid into.

What matters most is the accounts of citizens, which tell their experiences of the system, not of those administrating it. But citizens’ voices are being intentionally stifled, edited out and worse, their accounts are being re-written by politically expedient civil servants and government ministers. This presentation of ideological fictions and the use of gaslighting techniques is usually the preserve of totalitarian regimes, it’s not the behaviour one would expect of a democratic government in a so-called liberal society.

Governments with such limited social intelligence don’t lie very convincingly, but they do tend to be hard faced and tenacious. The real horror is their utter indifference and lack of responsiveness: that they really don’t care. They continue to demand our suspension of belief and dizzying cognitive dissonance. The relationship between citizen and state is one of abuse, founded on gaslighting strategies.

Rudd added: “And it is delivered with professionalism and care and compassion.”

Sure. The kind of “professionalism, care and compassion” that leaves a terminally ill man without sufficient support to meet his most basic needs, or that leaves a pregnant mother in extreme hardship, homeless, and resulting in the loss of her unborn child. Or one that pushes people towards suicide.

There is very little empirical evidence of the “professionalism, care and compassion” that Rudd claims. Furthermore, the trivialisation and persistent denials of the harm, distress and extreme hardship that is being inflicted on people because of government policies are all utterly unacceptable behaviours from a government minister, reflecting a profound spite within policy design, a profound lack of political accountability and a profound indifference for the consequences of these behaviours on the lives of ordinary people.

In fact, former Universal Credit staff reveal call targets and ‘deflection scripts, which means staff having to block or deflect vulnerable claimants, telling them that they would not be paid, or would have to submit a new claim, or have a claim closed for missing a jobcentre appointment, or be sanctioned – a penalty fine for breaching benefit conditions – or go to the food bank.

One whistleblower said that her role often felt adversarial. She said: “It was more about getting the person off the phone, not helping.” That’s a very strange kind of “compassion.”

As researchers have concluded, Universal Credit is a complicated, dysfunctional and punitive’ system that makes people increasingly anxious, distressed, with some of the most vulnerable citizens in the UK being pushed to consider suicide, and it ‘simply doesn’t work.’ (See Universal Credit is a ‘serious threat to public health’ say public health researchers, for example).

A devastating National Audit Office report last year about Universal Credit concluded that the DWP was institutionally defensive and prone to dismissing uncomfortable evidence of operational problems. Welfare secretary at the time, Esther McVey, felt the need to make a speech in July in which she promised that where problems arose in future the department would “put our hands up, [and] admit things might not be be going right”.

It’s also clear – in the words of the public accounts committee – that there is a “culture of indifference” within the DWP and wider government.

It’s time that government ministers started to listen to citizens’ voices, to service users – as well as campaigners, researchers, charities and the opposition Parties. And the United Nations – instead of presenting denials that policies are seriously harming people. But there is every indication that they won’t.

Universal Credit’s malign effects are obvious to anyone who actually looks, and is willing to listen to the voices of those affected by this punitive, mean-spirited and fixated, theory-laden, ideologically driven, miserly provision, that was, at the end of the day, paid for by the very public who are claiming it.

Labour MP Maria Eagle flatly stated that Rudd’s comments are “not true” and are “out of touch”.

She said: “The entire design of the system puts people in debt and the benefit cuts accompanying its introduction have made it far worse.”

Rudd was questioned by the Mirror after she said yesterday: “Maybe things that were  proposed previously weren’t effective or weren’t compassionate in the way that I want them to be.”

Mirror journalists asked if she could, ‘hand on heart’, say it was “compassionate” to double UC claimants this year, keep the two-child limit and keep the benefit freeze until 2020.

Rudd did not respond to the question, instead replying: “The overall product that is Universal Credit is absolutely compassionate.”

Product? That’s a very odd word to use for lifeline support – the public services that are our social insurance which people have paid into for those times when they need it.

And using key words from a government strategic comms crib sheet – James Cleverly among others has also opted for the word ‘compassionate’ to describe the welfare ‘reforms’ – does not make those narratives the reality experienced by citizens who need to access support from public services. Saying it does not make it real. This is something the Conservatives seem to have overlooked – that their narratives don’t match people’s realities. That’s the problem with telling lies – the empirical evidence catches up with you sooner or later.

Starving people and leaving them in destitution is not ‘compassionate’. Using a publicly funded public service to deliver punitive and a blunt, coercive, authoritarian behavioural modification programme is not ‘compassionate’. These are the actions and narratives of a government dipping a toe into the realms of totalitarianism.

Rudd claimed that UC needs to be ‘improved’, including to make it fairer to woman, but also said it was a “vital reform delivering a fair and compassionate welfare system”, “by far the most important and crucial reform” and a “force for good”.

Yesterday, the high court concluded that the Universal Credit assessment is illegal. The first judicial review verdict of Universal Credit found that the cutting of severe disability premiums from those who had previously claimed ESA was discriminatory.  How many more legal changes will it take to make the government act with some decency and observe basic laws and human rights?

Rudd went on to claim, somewhat incoherently, that the ‘old system’ was “broken”, “not a utopia that we should return to” and under Labour someone unemployed could receive “£100,000 housing benefit per year.”

The charity Fullfact submitted a freedom of information (FoI) request to the DWP in 2012, following the same claims from David Freud, among other Conservative minsters, that people claiming social security support were receiving £100,000 housing benefit per year. The figures in the response showed that over four out of every five Housing Benefit claims are below £100 per week (the equivalent of £5,200 per year) according to the September 2010 figures, while only 70 out of over 4.5 million recipients claimed over £1000 per week, around 0.001% of the total.

Even this is likely to overstate the number claiming £100,000 per year however, as a family would need to claim over £1,900 per week to hit this total. Previous FoI responses from the Department have suggested around five families were awarded this amount.

Ministers and the media repeatedly failed to highlight what is such a small number of the total, and printed screaming and misleading headlines that were inaccurate, without putting this into a wider context. While the evidence suggests that there are a small number of Housing Benefit claims of more than £100,000 per year –  around five – these cases are very much the exception rather than the rule. Focusing exclusively on these outliers without first putting them into context, where over 80% of claims are below £100 per week, has [intentionally] distorted the debate about welfare, aimed at de-empathising the public and providing a justification narrative for cuts.

Other information drawn from the FoI request found that larger claims tended to come from larger families, and the average household size for people claiming over £40,000 was six. For more details, do check out the numbers in the request itself, which is available here.

Perhaps ‘utopias’ are relative. What we are currently witnessing is not “compassionate” or a “force for the good”: it is the dystopic system of an authoritarian state inflicting punishment, discipline and coercion on our most vulnerable citizens.

It’s a state programme that dispossesses citizens, with catastrophic human costs, to fund the tax cuts demanded by a handful of powerful and wealthy vultures, who live lavishly within a culture of entitlement, while the rest of us are increasingly impoverished. 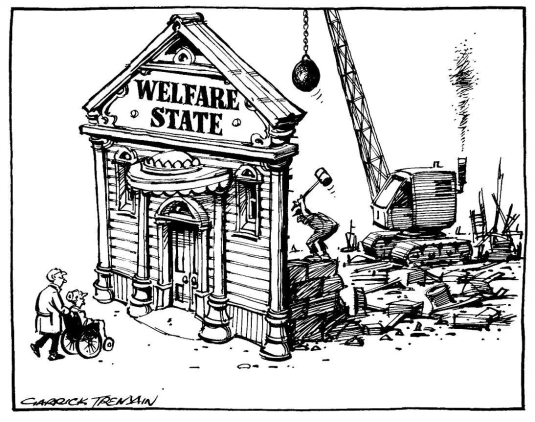 Amber Rudd claims that Universal Credit is ‘compassionate’. She must have been taking lessons in Doublespeak again.

I originally published this as part of a larger article.